If you've just landed on this post, you'll probably want to check out Part One, where the students enter through Platform 9 3/4 and visit Diagon Alley for their supplies, and Part Two where they take their first classes!

After defeating the troll that broke in to the grounds, it was time to get back to the business of magical learning with POTIONS CLASS! In this class, we learned how to use Powdered Bulb of Narcissus to make Carnivorous Narcissus Ectoplam that is capable of drawing out elevated feelings of ego and self-importance. Muggles often mistakenly refer to this as "Magnetic Slime", having no idea of its true magical properties. 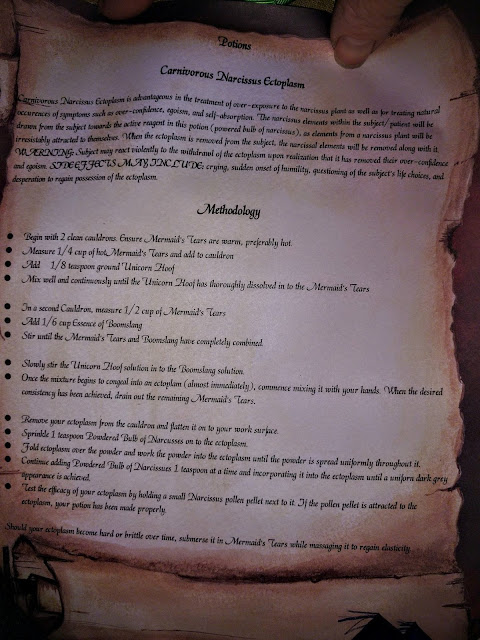 Here's the full text and instructions if anyone's interested! Oh, and if you want to try it... Mermaid's Tears = water, Unicorn Hoof = Borax, Essence of Boomslang = Elmer's Glue, Powdered Root of Narcissus = iron filings/powder, and Narcissus Pollen Pellets = magnets (the stronger the better). I'll put the text in italics again so you can just scroll on past if you want (though I do recommend reading the first paragraph at least).

Carnivorous Narcissus Ectoplasm is advantageous in the treatment of over-exposure to the narcissus plant as well as for treating natural occurences of symptoms such as over-confidence, egoism, and self-absorption. The narcissus elements within the subject/patient will be drawn from the subject towards the active reagent in this potion (powered bulb of narcissus), as elements from a narcissus plant will be irresistably attracted to themselves. When the ectoplasm is removed from the subject, the narcissal elements that have been pulled from the subject will be removed along with it.
WARNING: Subject may react violently to the withdrawl of the ectoplasm upon realization that it has removed their over-confidence and egoism.
SIDE EFFECTS MAY INCLUDE: crying, sudden onset of humility, questioning of the subject’s life choices, and desperation to regain possession of the ectoplasm.

Slowly stir the Unicorn Hoof mixute in to the Boomslang mixture.
Once the mixture has begun to congeal into an ectoplam, commence mixing it with your hands. When the desired consistency has been achieved, drain out the remaining Mermaid’s Tears.

The end result! Kids who successfully create the ectoplasm (which was all of them) got tickets to spend later. 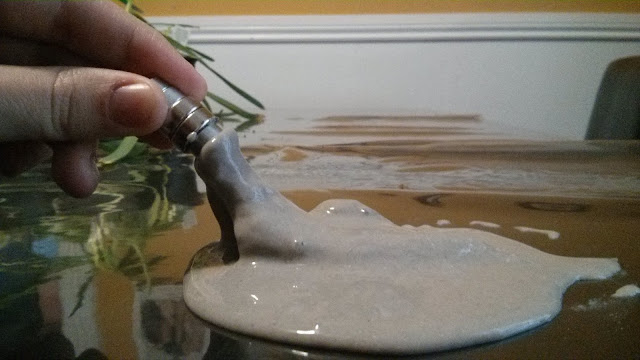 After Potions class, we moved on to Charms! In Charms the students learned how to duel. My son (the birthday boy) actually came up with this whole battle system, which was loosely based on Wizard101. We made up and handed out spell cards to everyone as well, so they could keep track of which spells they could use and what they did. (If anyone's interested, I can post pics of the spell cards as well, but I'd have to go digging for them, lol.) 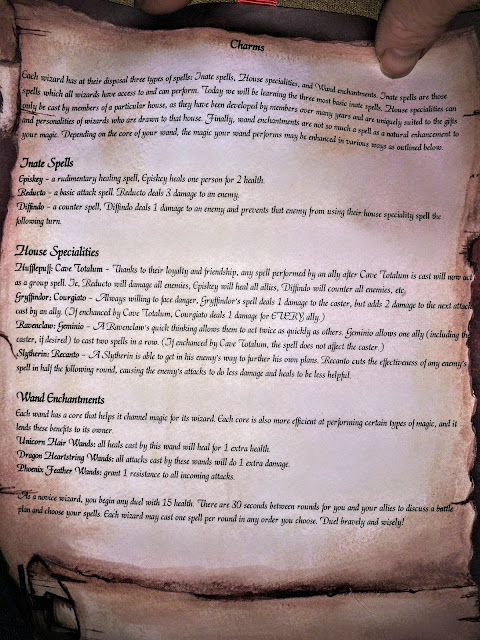 After learning about how the duelling system works, the kids got to participate in duels against each other. No pictures of the duels, sadly... keeping score proved quite an interesting challenge! Here's the full text:

Each wizard has at their disposal three types of spells: Inate spells, House specialities, and Wand enchantments. Inate spells are those spells which all wizards have access to and can perform. Today we will be learning the three most basic inate spells. House specialities can only be cast by members of a particular house, as they have been developed by members over many years and are uniquely suited to the gifts and personalities of wizards who are drawn to that house. Finally, wand enchantments are not so much a spell as a natural enhancement to your magic. Depending on the core of your wand, the magic your wand performs may be enhanced in various ways as outlined below.

House Specialities
Hufflepuff: Cave Totalum - Thanks to their loyalty and friendship, any spell performed by an ally after Cave Totalum is cast will now act as a group spell. Ie, Reducto will damage all enemies, Episkey will heal all allies, Diffindo will counter all enemies, etc.
Gryffindor: Courgiato - Always willing to face danger, Gryffindor’s spell deals 1 damage to the caster, but doubles the damage of the next attack cast by an ally. (If enchanced by Cave Totalum, Courgiato deals 1 damage for EVERY ally whose attack will be enchanced.)
Ravenclaw: Geminio - A Ravenclaw’s quick thinking allows them to act twice as quickly as others. Geminio allows one ally (including the caster, if desired) to cast two spells in a row.
Slytherin: Recanto - A Slytherin is able to get in his enemy’s way to further his own plans. Recanto cuts the effectiveness of any enemy’s spell in half the following round, causing the enemy’s attacks to do less damage and heals to be less helpful.

Wand Enchantments
Each wand has a core that helps it channel magic for its wizard. Each core is also more efficient at performing certain types of magic, and it lends these benefits to its owner.
Unicorn Hair Wands: all heals cast by this wand will heal for 1 extra health.
Dragon Heartstring Wands: all attacks cast by these wands will do 1 extra damage.
Phoenix Feather Wands: grant 1 resistance to all incoming attacks.

As a novice wizard, you begin any duel with 15 health. There are 30 seconds between rounds for you and your allies to discuss a battle plan and choose your spells. Each wizard may cast one spell per round in any order you choose. Duel bravely and wisely!

Following duelling practice it was time for QUIDDITCH! We had to modify the rules a little bit since we (believe it or not) do not actually have a magical Snitch. ;) Each team got 2 points for getting the Quaffle through a small hoop and 1 point for getting through a large hoop. (They also won tickets for scoring goals.) The first team to 10 won the match. 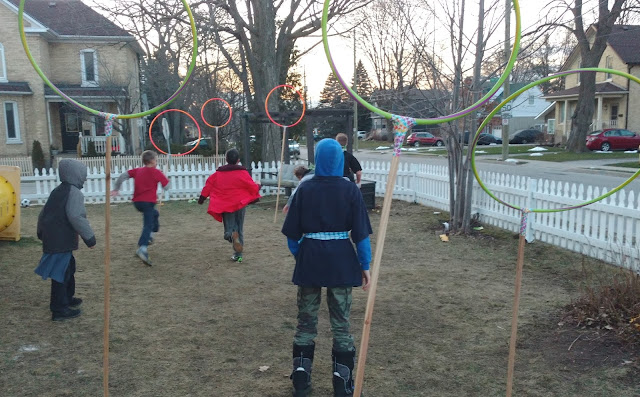 Video of the game in action!
While two of the houses would compete against each other in Quidditch, the other houses were told that a dark wizard had stolen the Sorting Hat, along with a lot of other valuables! They were tasked with finding the dark wizard and duelling her. If they could defeat the wizard (who for you wizard101 players was my son's design of a "cheat boss"; she would cast Cave Totalum on the first round, and Bombarda on the second to deal 10 damage to all players, then just repeat this over and over), they would win a bag full of loot (candy and more tickets)! Unfortunately we didn't get any pictures of the "dark wizard", but the kids certainly found it challenging; only one team actually figured out how to win the battle, but MAN were they ever proud of themselves once they finally got it!

That was the last of our Hogwarts subjects for the day, and once the kids were done with battling the boss and had finished their Quidditch matches, they got to gather up their tickets and head back inside and to Diagon Alley to make their purchases, which I'll start a new post for.

Up Next: Part Four! The students make their return trip to Diagon Alley to spend their tickets, have a magical birthday feast, and watch the birthday boy open presents!