Before I begin, I'm just going to clarify that the party itself was CRAZY (with 22 kids in the house I'm not sure what else it would be, lol), so some of these pictures were taken either before or afterwards, because many of the ones we took DURING the party just like a whole bunch of kids in a crowd and don't let you actually SEE anything. ;)

When the guests came to the party, they had to enter the magical world through Platform 9 3/4. 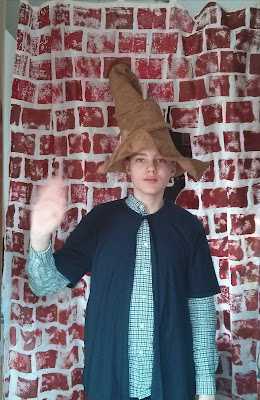 After passing through Platform 9 3/4, they headed on up Diagon Alley to purchase their school supplies! Diagon Alley was located in our upstairs bedroom/playroom/school room, and each of the 3 rooms had two shops in it. The first room was... 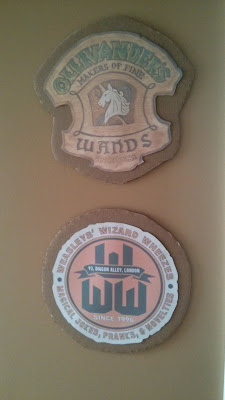 Ollivander's and Weasley's Wizard Wheezes! Weasley's had wares for sale that the kids could buy at the end of the party; we did lots of activities during the party that let the kids earn tickets, which they could later use to buy stuff on their return trip to Diagon Alley. At the start of the party, however, they had no tickets yet so the focus in this room was on getting their wands! Before they could choose theri wand (or rather, before their wand could choose them), each student was asked a question that would determine what variety of wand they would receive. That question was:

You and your best friend have been taking classes on healing magic. Your best friend is a good healer, but you're the best in the class. One day, a dark wizard attacks the school. He is running around the grounds and attacking anyone he can find. Your best friend is injured and you want to help by healing them, but if you take the time to do this, the dark wizard will likely escape. What do you do?
A- Stop fighting and heal your friend. The dark wizard tries to attack the school all the time, there will be another chance to catch him. (If the student chooses this answer, they receive a Unicorn Hair wand which increases healing by 1.)
B- Chase after the dark wizard and battle him. Your friend is a good healer (even if not quite as good as you); they're more than capable of taking care of themselves. Besides, there's no knowing how many other people could hurt if you let him get away. (If the student chooses this option, they get a dragon heartstring wand, which increases attack power by 1.)
C- Cast a quick protective enchantment over your friend to keep them safe while they figure out how to heal themselves. It is possible that even a short spell like this could give the dark wizard time to get away, but you have to do SOMETHING to help your friend. (If the student choose this option, they receive a Phoenix Feather wand which gives them 1 resist to any incoming attack.)

Here are some of the wands they kids received! We actually ended up making even more wands before the party as the guest list grew a little, and we wanted to make sure we had spare wands left over for any kids who lost/broke theirs. 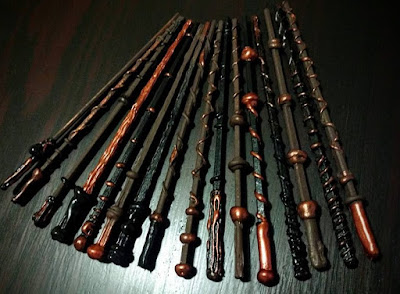 Next up in Diagon Alley was 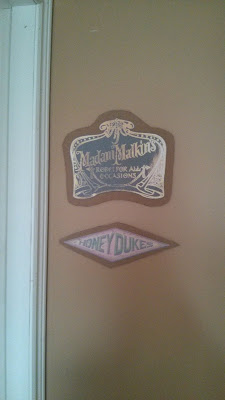 Madam Malkin's and Honeydukes! As with Weasley's Wizard Wheezes, Honeydukes had treats available for tickets, but as the students hadn't earnd any tickets yet they couldn't actually buy them yet. However, in this room they each got a robe to wear for their day at Hogwarts (that they got to take home after the party). You'll see the robes on the kids in a few of the pictures in subsequent posts, but if anyone's curious about how we made 20 robes, here's a link to the tutorial we followed.

The final stop on Diagon Alley was.... 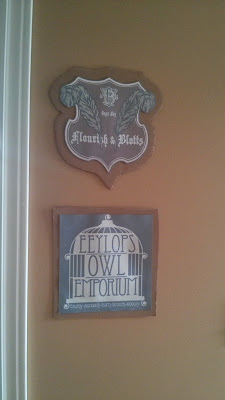 Flourish & Blotts, along with Eeylop's Owl Emporium! The owls for sale at Eeylops could only be bought with tickets, but the kids could check them out during this first trip to Diagon Alley. At Flourish & Blotts, each student picked up their scrolls so that they could follow along with today's schoolwork. And yes, we actually did magical classes. 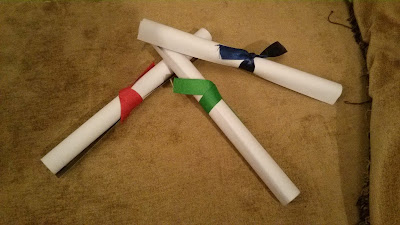 After getting all their school supplies from Diagon Alley, it was time to head over the Hogwart's Dining Hall, which I'll talk about in the next post.

Up Next: Part Two! The Sorting Ceremony, History of Magic, Care of Magical Creature, Herbology, and a battle with a troll who snuck in to the grounds!
Posted by Mercenaries101 at 07:32